The F1 Esports Series Pro Championship 2022 got underway this week. The virtual Formula 1 championship has established itself as the world’s premier sim-racing category. Each event is made up of three rounds, all run over 50% distance of their real counterparts. 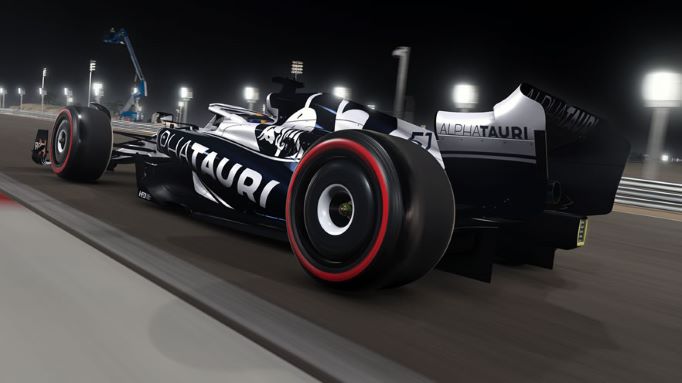 The F1 Esports 2022 season got off to a good start for our team, thanks to a strong showing from our sim-racers. Here are the results and what our trio of drivers, Sebastian Job, Josh Idowu e Joni Törmälä had to say after the first three rounds.

A great start to the season, as both our drivers finished in the points. Qualifying was extremely close with the entire field all within the same second! Englishman Sebastian Job made it to Q3 and qualified tenth, while on his debut with our team, Welshman Josh Idowu was 13th. Josh actually got off the start line better than Seb, moving up to 9th, while Seb dropped to 11th.

There was a long DRS train which made overtaking difficult. Along with most of the field, our pair were on Hard tyres and maintained a good pace until switching to Mediums at half-distance. In the last two laps, Job had a thrilling duel with Ferrari’s Brendon Leigh, who was chasing on much newer Soft tyres.

Sebastian kept it together to keep his fellow countryman behind him, taking the flag in seventh and later promoted to sixth as another driver ahead of him was penalised. Idowu came home tenth, while Lucas Blakely converted pole into the win for McLaren.

This time, Idowu was teamed with Törmälä, but the home race did not go particularly well, starting with qualifying as Joni and Josh lined up P14 and P16 respectively on the grid. Things got worse in the race, as our Finnish sim-racer had to retire with a hardware problem in his pedals and his Welsh team-mate could do no better than 12th. McLaren’s Blakeley made it two wins in a row.

For the third round of the first event of the year, we fielded Job and Törmälä. The Englishman was on fine form at his home track and started on the front row alongside pole sitter, Oracle Red Bull Racing Esport’s Rasmussen who went on to win.

Sebastian scrapped with the best all the way to the chequered flag, coming home a strong fourth. Joni was out of luck, dropping to the back after the start. He tried to come up with something different in terms of strategy, but it didn’t come off and he finished P19.

“Generally, a very good event for me with a P6 in Bahrain and a P4 at Silverstone, even though I messed up Bahrain qualifying. Silverstone could have been even better than fourth, as I feel we made a bit of an error in terms of race set-up, which limited our strategy options so I was undercut, when at least a podium was possible. However, it’s been a good start to the season and hopefully we will only get stronger from here.”

It was great to score points in Bahrain on my debut with Scuderia AlphaTauri Esports. Unfortunately, I was unable to repeat that in Imola, where I finished just outside the top ten. Now I can’t wait to be back on track when I hope to do better in the next event. Overall, the team has done very well and we are currently fifth in the Constructors’ standings, so we can be pleased with that.

“Imola did not go well for me. I struggled in Quali, only P14 and then in the race it got worse as I noticed my brake was permanently stuck on. I was P11 at that point. It was impossible to drive and I had to retire in the pits. For Silverstone, I topped the practice session before qualifying, so I was really confident and got through Q1 easily, but in Q2 I drove a bad lap, which wasn’t good enough to get to Q3 so I started P13 when I should have been much higher looking at my pace. In the race, I lost the car at Turn 4, which was my bad. I couldn’t get back into the points, so I tried for the fastest lap instead. I will try to come back stronger at the next round.”


Alfa Romeo F1 Team ORLEN Esports is ready to take on the 2022 F1 Esports Series Pro Championship, as the team lays down the challenge to the best Esports drivers in the world to take one of the most coveted titles in simracing.The 2022 season, which starts today, more >>


The F1 Esports Series Pro Championship 2022 runs from September to December, with four events, each of them made up of three races. Here is the official calenda more >>


Scuderia AlphaTauri is pleased to announce its driver line-up for the F1 Esports Series Pro Championship 2022. Flying the flag for our team will once again be Joni Törmälä and Sebastian Job, along with new entry Josh Idowu. more >>


Familiar faces Jarno Opmeer, Bono Huis and Dani Moreno are set to continue their battle for titles with the team, bolstered by fresh arrivals James Baldwin, Graham Carroll and Jake Benham.  On the eve of the 2022 F1 Esports Pro Series, re more >>


“We’re looking forward to getting started and will hopefully get some good results this year”McLaren Shadow has today announced a new driver line-up for the 2022 season. Lucas Blakeley, Bari Boroumand and Wilson Hughes will represent Shad more >>


Nicolas’s results ensured a season where Alpine Esports scored points in every round of the championship. Highlights included three podium finishes, pole position for Nicolas at Bahrain, COTA and Brazil as well as fastest lap at Shanghai. Tea more >>


in the finale of the 2021 F1 Esports Pro Championship. Driver Lucas Blakeley concluded the season with a podium at Interlagos to also take third in the Drivers’ Championship.Race 10: Imola more >>


A fantastic third place finish for Sebastian Job in the final round brought the curtain down on the 2021 F1 Esports Pro Championship.


Aston Martin Cognizant Esports Team approaches Event Four of the 2021 F1 Esports Pro Championship in title contention. With the support of Title Partner Cognizant, we’re bringing you all you need to know ahead of Wednesday and Thursday’s finale. more >>


Presented by CognizantAfter a strong start to the 2021 F1 Esports Pro Championship, Aston Martin Cognizant Esports Team aims to continue to fight at the front of the field in Event Three. With the support of Title Partner Cognizant, we’re bringing you all you need to know ahead of Wednesday and Thursday.  more >>


Alfa Romeo Racing ORLEN Esports endured a challenging second week of action in the F1 Esports Series as the three rounds in the programme delivered two points for the team.Racing in a trio of classic venues like Silverstone, Monza and Spa-Francorchamps, more >>


….following a triumphant debut in the series. 2021 F1 Esports Pro Championship Event Two Preview Presented by CognizantThe team is currently second in the Constructors’ Championship with 55 points ahead of the final n more >>


STREAM TIMEYouTube hereAll the action is split over four streams, just like last time out. Join us from 15:30 BST on YouTube and Twitch for the qualify more >>


Alfa Romeo Racing ORLEN F1 Esports brought home points in the first week of action for the 2021 F1 Esports Series, with Filip Prešnajder and Simon Weigang adding their names to the scoreboard after the first three races of the new season. more >>


Bahrain – China – Austria Not the best of starts to the Esports season, given that Scuderia AlphaTauri Esports Team was unable to bring home any points from the first three races, which were held over the past two days. The more >>


Esports (aka electronic sports) have emerged as something of a social phenomenon and sim racing – the branch devoted to motorsport games – is enjoying exceptional growth. Alpine in actively involved in this sport which is far less ‘virtual’ than some may imagine. more >>


Scuderia AlphaTauri Esports Team is proud to announce its driver line up for the F1 Esports Pro Championship 2021. Driving our virtual cars will once again be Joni Törmälä, joined by two newcomers Sebastian Job and Dario Iemmulo.This year, th more >>


…for unparalleled, immersive esports experiences Aston Martin Cognizant Formula One™ Team is delighted to announce an extension to its partnership with EPOS – which will now incorporate the premium audio device company’s gaming equi more >>


…while Joe Hountondji drifts into 16th on his debutAlex claimed a well-earned third place at the final round of the 2021 F1 Esports Virtual Grand Prix Series. His teammate, and one half of the Red Bull Drfitbrothers, Johannes ‘Joe’ Hountondji f more >>


Red Bull Racing Test and Reserve Driver Alex Albon and one-half of the Red Bull Driftbrothers, Johannes ‘Joe’ Hountondji, will be teammates for the final round of the F1 Esports Virtual Grand Prix series this weekend in Brazil. Alex competed i more >>


Alex Albon claimed second place at Silverstone in the second round of the F1 Esports Virtual Grand Prix series. His teammate and Red Bull Junior Liam Lawson finished in sixth on his Virtual GP debut for Red Bull Racing. This year’s Virtu more >>


Red Bull Racing Test and Reserve Driver Alex Albon and Red Bull Junior Team member Liam Lawson will team up for the second round of the F1 Esports Virtual Grand Prix series this weekend at Silverstone. Announced earlier this week as Red Bull teammates for more >>


•    Alpine F1 Team is to field YouTube influencers Squeezie and TheAmusante for round two in the Virtual Grand Prix series•    British Grand Prix to host round two of three, after team’s young drivers finished seventh and eleventh in last weekend’s opening round•    Nicolas Longu more >>