Alfa Romeo F1 Team ORLEN Esports is ready to take on the 2022 F1 Esports Series Pro Championship, as the team lays down the challenge to the best Esports drivers in the world to take one of the most coveted titles in simracing. 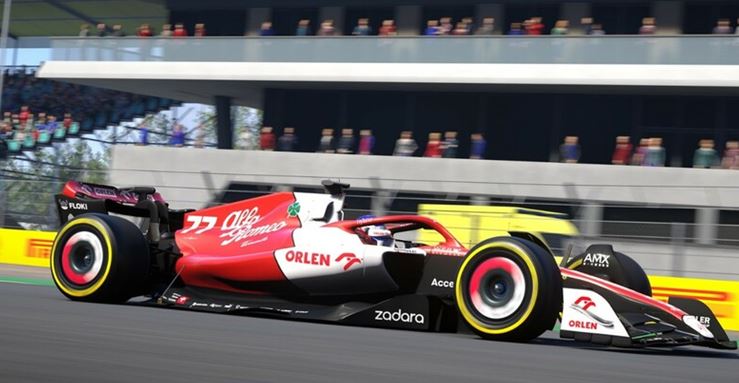 The 2022 season, which starts today, will feature four rounds of the action-packed racing that has come to symbolise F1 Esports: however, there are some key differences in the way the championship is run, designed to make the show even better for both veteran and new fans of the series.

Teams will play an even bigger part as strategy becomes key: the length of the races has been extended to 50% of the full distance, meaning each round will play out more intensely and the choice of tyres – and when to put them – will have an even bigger impact on the outcome of every race. Due to the increased length of each round, as well, events will now span three days – Wednesday to Friday.

Nico Longuet: “The season is about to start and the nerves are starting to creep in, but that’s normal. My team and I put a lot of effort into this year’s preparations and we’re going to give it our all. As always, we want to win together.”

Tomek Poradzisz: “I am going into my debut season and my focus is mostly on gaining experience whilst obviously trying to give it all. Preparations have been going fairly well and I feel ready for the season, but it will definitely be extremely challenging with how strong the grid is this year.”

Dani Bereznay: “I always learn from previous mistakes, and because of that I believe that this year’s preparation for F1 Esports has been the best ever. However, the field is the best ever as well, so the series will not be any less challenging.”


The F1 Esports Series Pro Championship 2022 runs from September to December, with four events, each of them made up of three races. Here is the official calenda more >>


Scuderia AlphaTauri is pleased to announce its driver line-up for the F1 Esports Series Pro Championship 2022. Flying the flag for our team will once again be Joni Törmälä and Sebastian Job, along with new entry Josh Idowu. more >>


Familiar faces Jarno Opmeer, Bono Huis and Dani Moreno are set to continue their battle for titles with the team, bolstered by fresh arrivals James Baldwin, Graham Carroll and Jake Benham.  On the eve of the 2022 F1 Esports Pro Series, re more >>


“We’re looking forward to getting started and will hopefully get some good results this year”McLaren Shadow has today announced a new driver line-up for the 2022 season. Lucas Blakeley, Bari Boroumand and Wilson Hughes will represent Shad more >>


Nicolas’s results ensured a season where Alpine Esports scored points in every round of the championship. Highlights included three podium finishes, pole position for Nicolas at Bahrain, COTA and Brazil as well as fastest lap at Shanghai. Tea more >>


in the finale of the 2021 F1 Esports Pro Championship. Driver Lucas Blakeley concluded the season with a podium at Interlagos to also take third in the Drivers’ Championship.Race 10: Imola more >>


A fantastic third place finish for Sebastian Job in the final round brought the curtain down on the 2021 F1 Esports Pro Championship.


Aston Martin Cognizant Esports Team approaches Event Four of the 2021 F1 Esports Pro Championship in title contention. With the support of Title Partner Cognizant, we’re bringing you all you need to know ahead of Wednesday and Thursday’s finale. more >>


Presented by CognizantAfter a strong start to the 2021 F1 Esports Pro Championship, Aston Martin Cognizant Esports Team aims to continue to fight at the front of the field in Event Three. With the support of Title Partner Cognizant, we’re bringing you all you need to know ahead of Wednesday and Thursday.  more >>


Alfa Romeo Racing ORLEN Esports endured a challenging second week of action in the F1 Esports Series as the three rounds in the programme delivered two points for the team.Racing in a trio of classic venues like Silverstone, Monza and Spa-Francorchamps, more >>


….following a triumphant debut in the series. 2021 F1 Esports Pro Championship Event Two Preview Presented by CognizantThe team is currently second in the Constructors’ Championship with 55 points ahead of the final n more >>


STREAM TIMEYouTube hereAll the action is split over four streams, just like last time out. Join us from 15:30 BST on YouTube and Twitch for the qualify more >>


Alfa Romeo Racing ORLEN F1 Esports brought home points in the first week of action for the 2021 F1 Esports Series, with Filip Prešnajder and Simon Weigang adding their names to the scoreboard after the first three races of the new season. more >>


Bahrain – China – Austria Not the best of starts to the Esports season, given that Scuderia AlphaTauri Esports Team was unable to bring home any points from the first three races, which were held over the past two days. The more >>


Esports (aka electronic sports) have emerged as something of a social phenomenon and sim racing – the branch devoted to motorsport games – is enjoying exceptional growth. Alpine in actively involved in this sport which is far less ‘virtual’ than some may imagine. more >>


Scuderia AlphaTauri Esports Team is proud to announce its driver line up for the F1 Esports Pro Championship 2021. Driving our virtual cars will once again be Joni Törmälä, joined by two newcomers Sebastian Job and Dario Iemmulo.This year, th more >>


…for unparalleled, immersive esports experiences Aston Martin Cognizant Formula One™ Team is delighted to announce an extension to its partnership with EPOS – which will now incorporate the premium audio device company’s gaming equi more >>


…while Joe Hountondji drifts into 16th on his debutAlex claimed a well-earned third place at the final round of the 2021 F1 Esports Virtual Grand Prix Series. His teammate, and one half of the Red Bull Drfitbrothers, Johannes ‘Joe’ Hountondji f more >>


Red Bull Racing Test and Reserve Driver Alex Albon and one-half of the Red Bull Driftbrothers, Johannes ‘Joe’ Hountondji, will be teammates for the final round of the F1 Esports Virtual Grand Prix series this weekend in Brazil. Alex competed i more >>


Alex Albon claimed second place at Silverstone in the second round of the F1 Esports Virtual Grand Prix series. His teammate and Red Bull Junior Liam Lawson finished in sixth on his Virtual GP debut for Red Bull Racing. This year’s Virtu more >>


Red Bull Racing Test and Reserve Driver Alex Albon and Red Bull Junior Team member Liam Lawson will team up for the second round of the F1 Esports Virtual Grand Prix series this weekend at Silverstone. Announced earlier this week as Red Bull teammates for more >>


•    Alpine F1 Team is to field YouTube influencers Squeezie and TheAmusante for round two in the Virtual Grand Prix series•    British Grand Prix to host round two of three, after team’s young drivers finished seventh and eleventh in last weekend’s opening round•    Nicolas Longu more >>


Alex Albon and Jeffrey Herlings competed for Red Bull Racing in the first round of the Formula One Virtual Grand Prix to raise funds for spinal cord research foundation, Wings for Life. Red Bull Racing Esports Drivers Marcel Kiefer and Frede Rasmussen were drafted in to qualify in the Sprint Race, handing over the baton to Alex and Jeffrey for the Feature Race. more >>